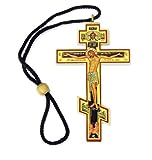 Answer by JJ
While both the East and the West use icons the Eastern Churches definitely put more importance on them. Both do use prayer and fasting to create icons, however to the Eastern Church the icon is seen as a bit more than just a symbol as it contains the image of God, and the Saints, and is therefore a “dwelling place” of God’s grace.

In the Western Church, particularly in the largest rite (Roman) while they seem to definitely receive a higher respect to those who understand them, they are generally not given as high of treatment as the East gives them. However the amount of respect given it does vary within the Western Church, due to the differences in the rites, for example the Byzantine or the Greek Catholic rite use icons in the same respects as the Eastern Church, not so surprisingly due to their recent (well relatively) return.

icon of Mary – from Christmas ads Image by lars hammar
This icon of Mary is based on a traditional Byzantine icon of the Madonna and child, but made with cut-out Christmas ads. That’s the Gospel at work, taking the profane and commercial and materialistic, and turning it to something holy.