Image by Ron Cogswell
Founded in 1689, the Immanuel Episcopal Church on the Green in New Castle (DE) is one of the oldest Episcopal parishes in the U.S. Immanuel’s parishioners have been worshiping on the spot where the church stands for over 300 years.

Immanuel Church was the first parish of the Church of England in Delaware (then still part of Pennsylvania). Work on a church building began in 1703, and was mostly completed by 1708.

The church is located at Strand and Harmony Streets in the heart of Old New Castle, a village of well preserved colonial and federal homes and public buildings. A stroll through New Castle reveals the original capital of Delaware, the site where William Penn landed in America, as well as beautiful 17th, 18th and 19th century buildings – all within a 7-block walk of the Delaware River.

Part One (Standard Screen) – This is the beginning segment of the December 14, 2008 church service – the Third Sunday of Advent – at Trinity Episcopal Church, Fredonia, NY Advent is the waiting period before Christmas for Christians in preparation for celebrating the birth of Jesus, Our Savior! Video Credits are shown in this opening segment with background music sung by the choir. At the beginning of the service a cross mounted on a long staff is carried at the head of the opening procession. A processional hymn is sung as the celebrant, choir and assistants walk slowly down the center aisle. Video recording & editing by Bill Parks, Stanwrite@aol.com — www.ChurchTVsite.com. Notes: 1) To watch these videos in higher resolution, click on the words beneath the screen “watch in high quality.” After it starts playing, pause it for a few seconds to let the higher resolution video load before you resume play. 2) If you click on the icon to display the video in full screen mode, then it’s best to view in high quality and also view from a distance just like you would a program on a regular TV set.
Video Rating: 4 / 5 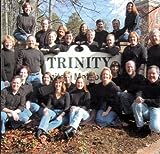 Live performance recording from the Trinity Praise Team from Trinity United Methodist Church in Richmond, VA This concert includes a piece written and performed by Kevin Burton in tribute to his sister, Alysia Burton Basmajian, who died in the World Trade Center on 9/11/01.

Revered as the Prophet of the Restoration, Joseph Smith is a man who has changed the history of the world. From humble beginnings, as a farm hand in up-state New York, to Mayor of Nauvoo to First Prophet of The Church of Jesus Christ of Latter-day Saints, he bore a resounding witness of God the Father and Jesus Christ. This solid resin statue is coated in bronze enamel and stands 6.5 inches tall.