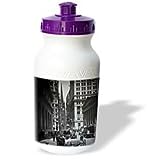 Sub Treasury Old Trinity Church Wall Street New York City Glass Slide Water Bottle is an eco-friendly way to carry your favorite drink to school, work or anywhere you go. This 21 oz sports bottle features an easy-flow drinking spout and is BPA-free, lead-free and FDA Approved. Custom printed high gloss decal is affixed to white sport bottle with image on both sides. Color will not run or fade with use. Hand washing recommended.

Vintage postcard of the Calvary Church in San Francisco, California. The postcard dates to the period of 1915-1920. The card is in good condition with wear to the corners and edges. The card was never used or mailed.

Vintage postcard of the Broadway Methodist Church in Indianapolis, Indiana. The postcard dates to the 1960s. The card is in good condition with wear to the corners and edges. The card was never used or mailed.

Vintage Postcard of St. Edward’s Church in Little Rock, Arkansas. The postcard dates to 1912. The card is in good condition with some wear to the corners and edges, and there is writing on the front of the card. The card bears a 1912 Little Rock, AR postmark, and the stamp is intact.

Vintage postcard of the First Baptist Church in St. Petersburg. The postcard dates to the 1960s. The card is in good condition with wear to the corners and edges, and the front of the card has a few scuffs. The card bears a 1962 St. Petersburg postmark, and the stamp is intact. Image by moirabot
trying on hats in a quiet corner.

from an email to g:

"also went to a crazy vintage clothes sale on saturday morning – a church hall in newtown was full of things retrieved from opshops in the south island, & it had been well advertised. we arrived only about 20 minutes after it had opened, apparently avoiding queues which had extended round the block, and the hall was packed with people. k. and her mum have a saying for such situations – "ladies, sharpen your elbows" – though actually the mood wasn’t too nasty. people hovering around a prized item ready to grab it if the first person who found it put it back down, but no actual snatching or shoving. still, a bit much to deal with pre-coffee.

but, found a dress (grey wintery fabric, homemade, with black stitching and buttons down the front, perfect size, thought it would be great for next winter but then wore it to a show that night and was still cold! wellington’s a bit behind us with the change of seasons). also 2 hats (ruffly art deco-esque bathing cap, turquoise fake fur bonnet) and a souvenir for you. left behind a pair of powder-blue knee-high platform boots that were almost ugg-boot in aspect but almost amazing. not quite regretting it."

Defines a biblical church as one that properly balances the eternal truths of Scripture with timely, relevant methods designed to engage the culture.

The latest book in the popular Re:Lit series picks up where Vintage Jesus leaves off, beginning with a focus on the person and work of Jesus and then exploring the confessional, experiential, and missional aspects of his church. This study grows out of the vintage concept of taking timeless truths from Scripture—truths about church leadership, preaching, baptism, communion, and more—and blending them with aspects of contemporary culture, such as multi-campus churches and the latest forms of technology, to reach people with the gospel.

While Vintage Church is helpful for pastors and church leaders, it is the kind of book you could hand to someone who has questions about ecclesiology but finds the very term ecclesiology intimidating. The authors put forth twelve practical questions about church doctrine and answer them in clear, biblical language that lay people and new believers can understand.