From Haemimont Games, The First Templar is a co-operative action adventure game in development for Xbox 360 and PC. The game portrays a dark and gritty view of the late 13th century where old friends become enemies, corruption spreads throughout the Church and fallen knights oppress the weak and renounce their oaths. The First Templar follows the story of two main characters – a French Templar, and his companion, a noble lady who has been proclaimed a heretic. Taking control over these two unlikely allies, the player must uncover the mysteries behind the Templar Order, play a role in a grand conspiracy, and discover the secret of the Holy Grail. The heroes face powerful opponents at every turn, in the face of the Saracen, King Philip IV of France and the Inquisition. The game also features both single player and co-op modes. When playing solo, the player can switch between the two characters, leaving the control of the second hero to the game’s AI. At any moment a second player can joinin and take control of the AI controlled hero.

The First Templar is an Action-Adventure game that returns the player the Holy Land during the Crusades to participate in the rise and perversion of the Knights Templar, the search for the Holy Grail and a grand conspiracy. The game features engaging single player gameplay in which players can switch between two characters, as well as two-player co-op both online and offline. Additional features include: individual combos as well as team-based attacks, RPG like character customization, Xbox LIVE support, 20 historical Medieval locations and an amazing soundtrack and graphics.

Battle Through the Holy Land as a Templar

The First Templar is a cooperative action adventure game, set in a dark and gritty portrayal of the late 13th Century during the Crusades where old friends become enemies, corruption spreads throughout the Church and once noble knights oppress the weak and renounce their oaths. Follow the path of two unlikely heroes on their search for the Holy Grail. The young French Templar Celian teams up with the noble lady and proclaimed heretic Marie to unveil a grand conspiracy within the Order of the Knights Templar. The heroes face powerful opponents at every turn including the Saracen, King Philip of France and the Holy Inquisition. 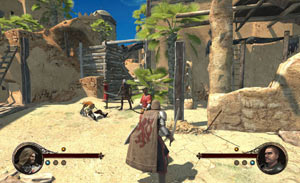 Decipher the secrets of the Templars alone or with a friend.
View larger.

Are you strong enough to fight your enemies with different weapons, unique combos or team attacks and unravel the biggest mystery of mankind? 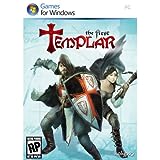