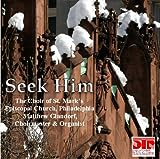 Saint Mark’s Church is known for its distinguished music program that graces its services and lifts the spirits of parishioners and visitors alike. The Choir of Saint Mark’s is a semiprofessional ensemble of 24 voices that sings the services for Solemn Mass, Feast Days, and special services in this historic Center City Gothic Revival masterpiece designed in 1847 by architect John Notman. At Saint Mark’s, it has been the tradition to offer both Advent and Christmas Lessons and Carols on the first Sunday in Advent and the afternoon of Christmas Eve. This recording is a selection of some favorites, both traditional and contemporary, from those services, as well as an inspiring organ improvisation by Matthew Glandorf.

Faith at the Gulf produced by Odyssey Networks

They helped their flocks rebuild after Katrina. They have been steadfast in the face of a fragile economy. But the BP Deepwater catastrophe has challenged the faith leaders of the Gulf in an unprecedented way. In this final segment of Odyssey Networks’ “Faith at the Gulf,” ministers from a variety of traditions explore the struggles they face in helping establish new priorities—priorities that the nation as a whole must eventually consider.

This last in the five-part series of video on-the-ground reports from Biloxi, MS features a conversation among Rev. Shari Prestemon, executive director of the Back Bay Mission of the United Church of Christ in Biloxi, MS, and faith leaders from the Biloxi area on enduring, overcoming, and addressing the need for a systemic change in our national lifestyle.

“It’s extremely important that in the midst of a crisis like this, faith leaders lift the word up,” Rev. Prestemon told Odyssey’s crew, “even if we don’t agree on everything…even if we don’t have the same perspective exactly or the same theologies.”

All of the “Faith at the Gulf” video reports can be viewed at www.odysseynetworks.org.

Odyssey Networks is the nation’s largest multi-faith coalition dedicated to producing and distributing media that promotes peace and tolerance and addresses issues of social justice. Established in 1987, Odyssey Networks is a service of the National Interfaith Cable Coalition, Inc. For more information visit www.odysseynetworks.org.