Spider Ledesma, congregation member of Lakewood Church, the largest church body in the US under the pastoral leadership of NY Times best selling author Joel Osteen, is detailing his full worship experience in a new, interactive autobiography entitled:

The interactive book covers a four year period in the every day life of Lakewood Church TV congregant Spider Ledesma, starting in June 2002 and ending in June 2006, and details all the difficult vicissitudes and ultimate victories he experiences during that time. Spider describes the invaluable role Lakewood Church and his late pastor John Osteen had, and now pastor Joel Osteen has in keeping him upbeat, encouraged, optimistic and expecting Victory in spite of tremendous daily challenges he faces along the way.

‘The Lakewood Factor – Days of Supernatural Victory’ will make publishing history as the first interactive autobiography when published which will include several hours of ‘Video Notes’ shot on location around the world and archived on the book’s website for readers to follow Spider’s incredible personal story which will supplement the readings adding an interactive dimension. The book also contains ‘Study, Info and Audio notes’ online which readers are referenced to which serve to expand on the subject matter at hand and as well a number of polls readers will participate in covering various subjects being discussed throughout the book.

Ledesma details his odyssey that begins in stinging heartbreak in Santa Cruz, CA and takes him through Normandy, France to Amsterdam in the Netherlands to Nicosia, Cyprus criss-crossing back over the Atlantic to the South in Mississippi for 15 months then to Toronto, Canada and ultimately ending up in Houston – in Victory. Ledesma shares in candor with the readers his own personal life and/or of those around him discussing mature themes, his challenges and behaviors which he addresses throughout the book and his desire to rise up to ‘become all that he has been called to be’ and mature in his walk with God. Through the ‘Video Notes’ Spider shares humorous life stories as well as insightful interviews with different guests as he ‘sight-sees’ in different global cities taking his readers around the world with him and in the process recording breathtaking views. The latter chapters of the book deal with his thoughts and comments about several aspects of American society offering his views on a myriad of subjects which includes but is not limited to: corporate and political corruption, gay marriage, police abuse, and homelessness. Spider also shares his personal business visions he has conceived and speaks of a possible future political ministry at a federal level.

Spider stated, “I truly believe there are literally millions of people who have either gone through or are currently experiencing the painful challenges of a relationship that broke their heart deeply and left them emotionally shaken like myself just as there are millions globally facing very difficult financial challenges including being homeless. I know there are millions more who have either given up on their hopes and dreams or had them shattered as well. I want all of them to know the Good News, every single one of them, that they are going to make it, that God still has an overwhelming plan of Victory for their life! I want them to know I love them and encourage them to look at my life and gain strength knowing that not only was God able to sustain me during the most difficult times in my journey but that He also brought me out on the other side to a place of wonderful peace, of renewed joys, redeemed relationships, a place where my heart is filled with great contentment and joy now, excited about living every day to the full. I have a newfound prosperity, more promotion and favor socially and a very healthy outlook on life. God turned around the negatives in my life and used it for my good and brought me out with a double portion of Victory. I really feel like my life is just beginning and holds an abundance of supernatural promotion and favor for me!”

The 6’11 Ledesma continued, “Both my late Pastor John Osteen and now my current Pastor Joel Osteen have encouraged me to Victory with their different but equally effective and highly complimentary styles. As a professional athlete who played in the 1987 NBA pre-season with the Los Angeles Clippers I have so appreciated and understood the critical life message (spiritual strategy) we as a Lakewood congregation have been blessed to hear week after week first with John Osteen, and now his son, Joel. This is what the title is referring to when I say ‘The Lakewood Factor’ – this ‘factor,’ this doctrine I have been blessed to receive has allowed me to not only survive my vicissitudes but to view them in a mature manner and to know that I would still come out on top in a big way. To think of my Heavenly Father as a big God who wanted to bless me with great and mighty blessings and fill my cup to overflowing with joy. My former and current pastor are emphasizing how to scripturally view our situations (our glass) as always ‘half-full’ because we focus on the goodness of God, His mercies, His restoration, His justice, His supernatural power, His love for us as His children in Christ. Finally I want to let all the readers know that God will bless you right where you are in your journey and maturity. When your giving it your best God knows it even when we do things we shouldn’t be doing. You don’t have to be ‘perfect’ to serve God, you just have to have a ‘want to’ and will to serve Him like Spider – and like Spider, in spite of my challenges and short comings God loves me, encourages me, continues to promote me and pours out his far-and-beyond favor on me in a brand new way every day. God is setting me up like Daniel said he would and giving me a name and fame (promotion) among all the people like He said in Zephaniah. I also work with God gladly and allow for these blessings of restoration and prosperity by simply believing my Heavenly Father, my Abba, loves me that much and that Christ has made me more than worthy to walk in Victory. I believe in and have been ‘coached’ to EXPECT the goodness of God and want to encourage all the readers to read my perceptions of a good God as taught to me by Lakewood Church and how this supportive and overcoming message of Victory is propelling me to heights unseen as of yet. To all I encourage you to be confident, God is for you and has a great plan for your life. I believe and confess this book will speak the power of God’s overwhelming life of Victory right into all who read it. I encourage all to learn of God through the pastoral message at Lakewood Church and Pastor Joel Osteen. Get ‘The Lakewood Factor’ down in your soul – you’ll be encouraged and go on to greater Victories!” 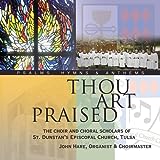 A collection of choral anthems, psalms and hymns in which the Choir and Choral Scholars with Organist/Choirmaster, John Hare, take the listener on a journey through the church’s liturgical year. From Advent through Easter and beyond, Thou Art Praised represents a portion of the repertoire sung at St. Dunstan’s, and features choral masterworks from the English Cathedral Tradition, to 20th c. American and various styles of psalm chants and hymn settings with descants.