For ‘M’ is Musick 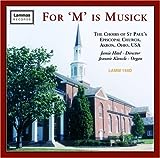 The Choir of Men and Boys is recognised in Akron, throughout the U.S. and the world for its high standards in maintaining a living Anglican Choral tradition. It sings Choral Eucharist or Choral Matins at 11:00 every Sunday as well as numerous Choral Evensongs throughout the year. Several tours and special events are planned each season.

The St. Cecilia Girls Choir sings weekly at the 9:30 Sunday service and has recently given world première performances of works by gifted young British composers. Together with the boys the girls have appeared live on stage at Clevelands Severance Hall with the Cleveland Pops Orchestra. The men sing with the girls on a regular basis, allowing the girls a more demanding repertoire.

The Chapel Choir is an auditioned group of mixed adults, which was formed in 2001. Besides extending a singing opportunity to adult women, the group strives to complement and enhance the liturgical life of St. Paul’s, providing music for some of the major feasts in of the Church’s Year. Services are often held in the more intimate setting of the Chapel.