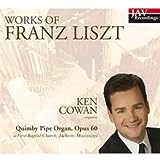 Liszt’s organ works, demanding as they are of a powerful instrument with a rich orchestral palette, are extraordinarily well-served by the Quimby pipe organ at First Baptist Church in Jackson, Mississippi.

Conceived in the American Symphonic tradition of organ building, the instrument offers a vast range of timbral and dynamic possibilities. It does justice to the depth and breadth of Liszt’s organ music, which is written in orchestral terms and on a grand scale.

Although the organs known to the composer himself were limited in their ability to imitate a brass chorus, for instance, or solo woodwinds, or even an ensemble of orchestral strings, Liszt’s music thrives on drama and color. The Quimby organ in Jackson offers a wealth of reed, flute and string stops designed to emulate the scope of a symphony orchestra. The instrument’s responsive key action also makes it possible to properly articulate Liszt’s fleeting passagework.

Liszt’s music demands careful consideration from the interpreter, as it is often rhapsodic and free-spirited in gesture, and quasi-improvisatory in structure, encouraging a wide range of interpretative freedom.

Off the DVD Ray Stevens – Comedy Video Classics, a comedic song about a squirrel that gets loose at church and the chaos that ensues Check out this DVD and other releases at: www.raystevens.com Buy the DVD at: raystevens.com
Video Rating: 4 / 5

“A Jackson, Miss., couple’s dream of exchanging vows in the church they had been attending was dashed last week when the church pastor told them that some members had complained about the black couple getting married in the predominantly white First Baptist Church of Crystal Springs…”.* Ana Kasparian, Cenk Uygur, and Steve Oh discuss on The Young Turks. *Read more here from Jimmie E. Gates and Alex Mcdaniel via The (Jackson, Miss.) Clarion-Ledger/USA Today: www.usatoday.com Video courtesy of WLBT TV. Support The Young Turks by Subscribing bit.ly Like Us on Facebook: www.fb.com Follow Us on Twitter: twitter.com Buy TYT Merch: theyoungturks.spreadshirt.com Find out how to watch The Young Turks on Current by clicking here: www.current.com

The Mississippi Squirrel Revival written by Ray Stevens (nb March 13, 2010 timtusphil1 informs me that “A couple named Carlene and CW Kalb Jr. wrote this.” And he’s entirely correct! Thanks, Tim.) Well, when I was kid I’d take a trip every summer, down to Mississip. to visit my granny in her ante bellum* world. We’d run barefooted all day long, climbing trees, free as a song. One day I happened catch myself a squirrel. I stuffed him down in an old shoebox, punched a couple holes in the top and when Sunday came I snuck him into church. I was sittin’ way back in the very last pew showin’ him to my good buddy Hugh, when that squirrel got loose and went totally berserk! What happened next is hard to tell. Some thought it was Heaven, others thought it was Hell, but the fact that somethin’ was among us was plain to see! As the choir sang “I Surrender All” the squirrel ran up Harv Newlan’s coveralls; Harv leaped to his feet and said, “Somethin’s got a hold on me!” Verse 2 Well Harv hit the aisles a-dancin’ and a-screamin’ some thought he had religion, others thought he had a demon and Harv thought he had a weed eater loose in his Fruit of the Looms. He fell to his knees to plead and beg, and that squirrel ran out of his britches leg, unobserved to the other side of the room. All the way down to the Amen pew where sat Sister Bertha “Better than you” Who’d been watching all the commotion with sadistic glee. Shoot, you should have seen the look in her eyes when that squirrel jumped … Image by J. Stephen Conn
On the south side of Rt. 370, across the highway from Brice’s Cross Roads National Battlefield Site, is the Bethany Associate Reformed Presbyterian Church. During the battle of Brice’s Cross Roads, Bethany Church was across the street from its present location. The church served as a field hospital following the June 10, 1864, battle.

The Bethany A.R.P. Church Cemetery, in use for more than 150 years, is also the burial site for 96 Confederates that fought and died as a result of the battle. Union dead from the battle have been re-interred to the National Cemetery in Memphis, Tennessee.

A historic marker at the church states that it was organized in 1852 with 25 charter members, including 4 African-Americans. The fact is, integrated churches were not unusual in the antebellum South. Even with the deplorable institution of slavery, the pre-Civil War South was more racially integrated than much of the North, which had very restrictive anti-black laws.

After his visit to America in the 1850s, Alex De Tocqueville, the French historian observed that "Race prejudice seems stronger in those states that have abolished slavery than in those where it still exists, and nowhere is it more intolerant than in those states where slavery was never known."

Had there been on War, slavery would have soon ended peacefully in the South, just as it did in the North, and many more Southern churches and other institutions would have remained integrated.

Northern atrocities of the War Between the States, followed by 12 years of Federal occupation and abuse during the disgraceful period called "Reconstruction," exacerbated a racial divide that would not be overcome in America for 100 years.