Caught in the Act: Live 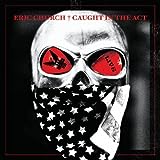 Records’ Eric Church will release a 17-track live album, Caught In The Act: Live, on Tuesday, April 9, 2013 featuring songs from Sinners Like Me, Carolina, and his CMA Award-winning 2011 release, CHIEF.

Caught In The Act: Live features raw, electric performances of songs like Pledge Allegiance To The Hag, Smoke A Little Smoke, How Bout You, Creepin and more.

The release of Caught In The Act: Live is fans first chance to take home a copy of Church s live show, the only of the country genre to be named Best Concerts Of 2012 by The New York Times who calls it, A mean show, and adds, Mr. Church has clawed his way into the country mainstream with a series of post-outlaw anthems, and delivered them with verve and tension, as if he might not be allowed to for much longer.