After Everything Now This 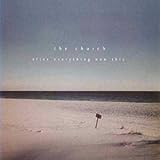 Over 2 years in the making and recorded on 3 continents. Thirsty Ear Records.After 1999’s place-keeping covers album, Box of Birds (which neatly paid tribute to such obvious Church influences as Television, Neil Young, and John Foxx-era Ultravox, along with less apparent ones like Mott the Hoople and, yes, Hawkwind), Australia’s longest-lived ether-rock quartet returns with a quietly enthralling collection of poetic, understated gems. The album starts with a pair of likely Church classics: “Numbers,” a drone-pop masterpiece in which vocalist-bassist Steve Kilbey counts out an elegantly remorseful chorus (“Seven for the lucky pricks who went to heaven…”), followed by the single, “After Everything,” the latest in the long line of lost-love songs the Church convey so well. Nor is the album without surprises: “The Awful Ache” time-changes in and out of a crunchy guitar break, while “Night Friends” sounds like a less misanthropic Pink Floyd. Throughout this self-produced 16th (!) album, Kilbey, guitarists Marty Willson-Piper and Peter Koppes, and drummer Tim Powles show why they remain one of the post-punk era’s most consistently satisfying bands, even if they are occasionally uncompromising to a fault (the atmospheric closing cut, “Invisible,” drags on a bit long). The Church may never repeat the success of 1988’s Starfish and its hit, “Under the Milky Way,” but that’s OK. After Everything Now This showcases a talent and sound that manages to keep maturing without ever growing old. –Bill Forman